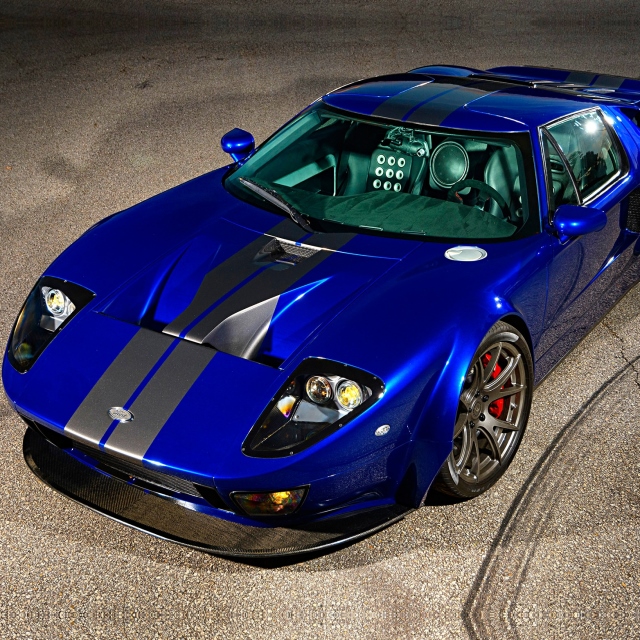 Over 50 years ago, the iconic Ford GT40 won the Le Mans 24-hour classic, in a momentous duel with Ferrari. The fight for victory was immense in scope, and took the resources of Ford, a team of the best professional drivers Ford could employ, and the management and development talent of some of the best designers in that space, including Eric Broadley of Lola fame, and some guy named Carroll Shelby.

In 2005, Ford released a street car called the Ford GT that bore more than a passing resemblance to the original race car that made so much history at Le Mans. This car was an obvious nod to their successes at Le Sarthe, and they even sold a version with a “Heritage” Gulf blue-and-orange paint scheme that echoed the livery on the winning car in 1966. But this time, Ford had no interest in racing the car. For them, it was just a halo car, with no racing pretensions.

Others, however, saw the potential in the car, and decided it would indeed make a competitive race car. Eventually, a small, privately-funded team owned by husband-and-wife drivers Dave and Andrea Robertson acquired two new race cars built by Doran to contest the American Le Mans Series (ALMS) in the GT2 class. The cars were built to meet the class requirements for the ALMS, and to be adaptable to the slightly different rules for the Le Mans 24-hour race as well. Over several seasons, the cars went from uncompetitive, to contending, even taking pole position at Petit Le Mans. The cars underwent constant development, as all race cars do, and eventually, the small team decided they would try to make their life-long dream happen – actually racing at Le Mans.

In 2011, that dream came true, as the Robertson Racing team was accepted at Le Mans. They were a bit of an anachronism, being a small family-run and sponsored team in a sea awash with factory sponsored cars. They also didn’t have the speed of the better-financed teams. They did have grit, however, and reliability seemed to be on their side as well.

And, of course, they had the tailwind of history at their back, racing an all-Ford product for the first time at Le Mans since the GT40s (on which their car was based) climbed to the top of the podium.

Incredibly, the Robertsons drove their car to the podium with a third place in class in their only appearance at the race. Dave and Andrea became the only husband and wife team to ever podium at Le Mans, and Andrea was, and is, the only grandmother to ever stride across the podium at Le Mans. They did it with a small team, without factory money or help, and against the giants of the industry.

So what does all that have to do with the Superlite GT-R? Well, that Robertson Racing GT became the model for Superlite to create it’s new GT-R(the 'R' stands for Robertson). The Superlite GT-R is a close replica of the same car that raced and podiumed at Le Mans. Based on the winning car’s body, the race and Championship-winning aluminum semi-monocoque chassis design that has made Superlite cars famous, and with space for any popular V8 engine in the back all make for a tremendous platform for a track or race car, at a fraction of the price of an original.