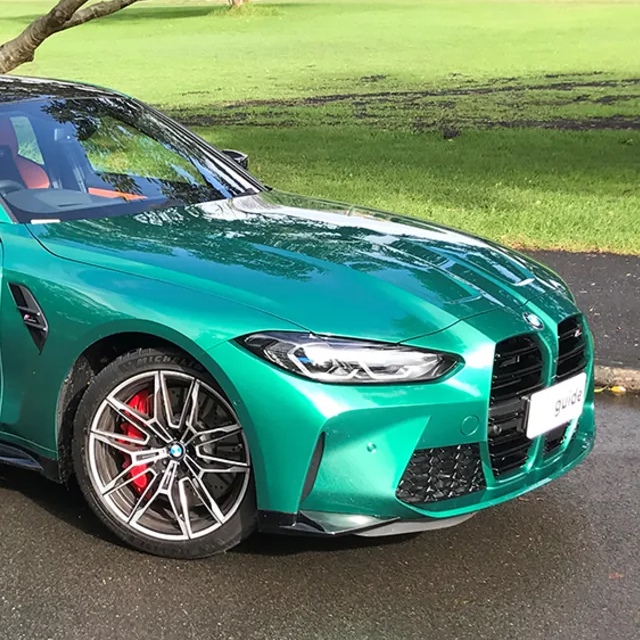 It feels like once in a generation, BMW feels the need to polarise automotive opinion with a controversial design direction.

Twenty years ago, then head of design for the brand, Chris Bangle, took a fearful hammering for his determined push towards more ‘adventurous’ shapes. Passionate BMW fans picketed the company’s famous ‘four-cylinder building’ HQ in Munich demanding his departure.

And who else but Bangle’s second-in-command from those days, Adrian van Hooydonk, has been leading the design department since his boss eventually left the building in 2009.

Van Hooydonk has created another firestorm of opinion in recent years by gradually increasing the size of BMW’s signature ‘kidney grille’ to what some see as comical proportions.

The latest variation on the oversize grille theme has been applied to various concept and production models, including the M3, and its M4 sibling.

As always, a purely subjective call, but the M3’s large, descending grille puts me in mind of a well known carrot-munching, cartoon rabbit’s upper incisors.

Time will tell whether such a bold treatment ages well or lives in infamy, but there’s no denying it dominates first visual impressions of the car.

Almost as much as our test example’s ‘Isle of Man Green metallic’ paint, a deep, lustrous shade that highlights the cars’s curves and angles, and regularly stopped passers by in their tracks.

The bulging bonnet carries angular strakes back from the grille, and features a pair of faux vents, which along with darkened headlight interiors (BMW M Lights Shadow Line), accentuate the car’s tough expression.

A modern M3 wouldn’t be an M3 without pumped up guards, in this case filled by fat 19-inch forged alloy rims at the front, and 20s at the rear.

How practical is the space inside?

At just under 4.8m long, a fraction over 1.9m wide, and a little over 1.4m tall, the current M3 is right in the Audi A4 and Mercedes-Benz C-Class size bracket.

There's plenty of room up front, and lots of storage, including a big box/armrest between the front seats, as well as two large cupholders and a wireless charging pad in a recessed section in front of the gear shift (which can be closed off with a roll-top style cover).

What are the key stats for the engine and transmission?

The M3 Competition is powered by BMW’s (S58B) 3.0-litre in-line, six-cylinder engine, an all-alloy, closed deck unit featuring direct-injection, ‘Valvetronic’ variable valve timing (on the intake side), ‘Double-VANOS’ variable camshaft timing (intake and exhaust side) and twin mono-scroll turbos to produce 375kW (503hp) at 6250rpm and 650Nm from 2750rpm, all the way to 5500rpm. A solid jump from the ‘standard’ M3’s already substantial 353kW/550Nm.

Not known for sitting on their hands, BMW M’s engine techs in Munich have used 3D printing to manufacture the core of the cylinder head, incorporating internal forms not possible with conventional casting.

How much fuel does it consume?

To help get to that impressive number, BMW has deployed numerous cunning devices including, an ‘Optimum Shift Indicator’ (in manual shift mode), on-demand operation of ancillary units, and ‘Brake Energy Regeneration’ which tops up a relatively small lithium-Ion battery to power an auto stop-start system,

Despite this tricky tech, we averaged 12.0L/100km (at the bowser), over a range of driving conditions, which is still pretty good for such a powerful and focused performance sedan.

Recommended fuel is 98 RON premium unleaded although, amazingly, 91 RON standard fuel is acceptable at a pinch.

Either way, you’ll need 59 litres of it to fill the tank, which is enough for a range of over 600km using the factory economy figure, and close to 500km based on our real-world number.

What does it cost to own? What warranty is offered?

BMW offers a three year/unlimited km warranty, which is off the pace given the majority of mainstream brands have stepped up to five-year cover, with some at seven, or even 10.

And the luxury tide is turning with premium players, Genesis, Jaguar, and Mercedes-Benz now at five years/unlimited km.

On the upside, bodywork is covered for 12 years, the paint for three, and 24-hour roadside assistance is complimentary for three years.